A year ago, we reported that the ICO (Initial Coin Offering) bubble had burst – just as we had predicted already in 2018. This was pretty easy to foresee, even though we did get a bit of hate mail from ICO fanatics along the way.

The ICO bubble grew to a significant size before it burst:

But don’t get me wrong – the blockchain technology behind the ICO phenomenon is very important: a major tool supporting the rapidly ongoing digitalization of almost everything.

Bitcoin (like most other cryptocurrencies) is based on a decentralized, public ledger technology called the blockchain.

As a result, each copy of the blockchain has a full ledger of the transactions – history can’t be changed, erased, or forged.

Do we need cryptocurrencies?

There are almost 9000 different cryptocurrencies: mostly born amidst the ICO fever and totally useless, but some of the strongest cryptos flourish:

The term fiat derives from the Latin word fiat, meaning “let it be done”. Fiat money was first used during the 11th century in China, and the US dollar was decoupled from gold as late as 1971. Fiat money has dominated the global market since the 20th century.

Government-issued fiat money has some very useful features like:

So, how do cryptocurrencies correspond with fiat money?

Cryptocurrencies as a store of value

A store of value is anything that retains purchasing power into the future. The most common store of value in modern times has been money, gold being the number two on the list. Money is optimal because of its liquidity: it can easily be exchanged for other goods and services. But when an issuer of fiat money (typically a nation-state) faces a crisis, fast inflation can affect its currency. Gold, Swiss Franc, and the US dollar have been traditional safe havens during times of crisis – gold has been around for eons and the US dollar also has withstood many a crisis.

The Covid-19 evidence indicates that when a serious financial and economic disruption hits, Bitcoin does not act as a safe haven – rather as an amplifier.

Bitcoin and other cryptos are teenagers at best and, therefore, there is no experience from long-term storage of value. 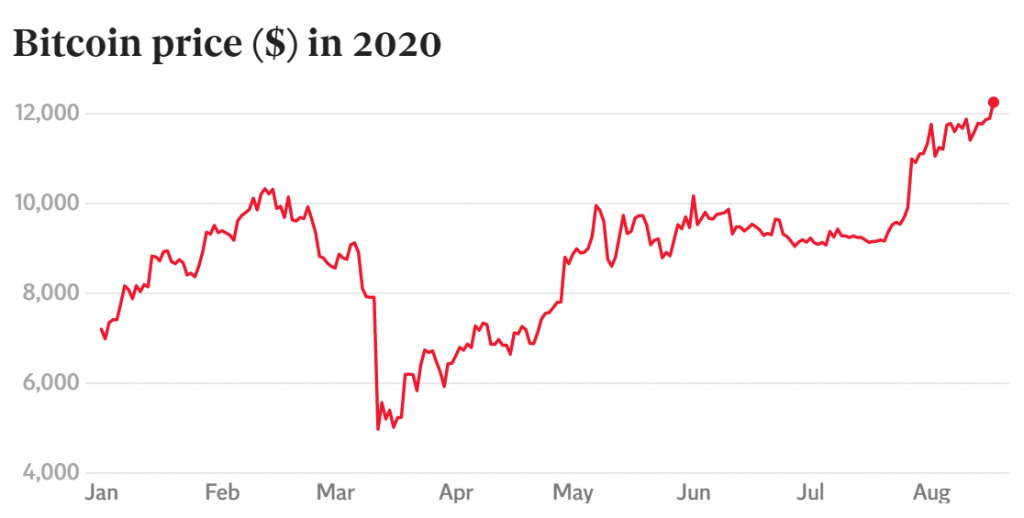 When a serious disruption hits, Bitcoin does not act as a safe haven – rather as an amplifier

Another similar drawback is the continual and significant short-term price volatility of most cryptos.  So-called stablecoins are designed to solve this problem: they are virtual currencies typically backed by an asset such as fiat money, gold, or even other cryptos to provide more stable value for the virtual currency – more about stablecoins in the next blog post.

Cryptocurrencies as a medium of exchange

There are several types of monetary transactions:

Bitcoin is relatively poorly suitable for any kind of smaller or faster payment, it is just too slow and expensive: about $20 for each transaction with close to 10 minutes average confirmation time. However, there are some promising workarounds under development.

The are several new third-generation crypto technologies that can successfully challenge fiat money-based payments in almost all transaction categories. But which model and technology will prevail in commercial transactions is a different story.

Some other Crypto-Fiat  differences

Cryptos have a few important and interesting differences compared to Fiat currencies and the traditional banking system.

Decentralized – The global, decentralized architecture means that no single entity — like the US government or Visa — can shut it down, freeze funds, or reverse transactions. There is also no centralized single point of failure. Early enthusiasts and supporters included people opposed to government control and taxation right.

Anonymity – Even though the balances of crypto accounts and transfers between accounts are publicly visible, the ownership information of an account is no stored. However, even Bitcoin is no longer quite as anonymous as it was in the early days:

Durability – This is a double-edged sword. Not a single Bitcoin has ever been lost on the blockchain. What has been lost, however, are private keys to get access to Bitcoins. User error is a primary threat to Bitcoin’s physical durability.

The first decentralized cryptocurrency, Bitcoin, was released first as a white paper in October 2008 and as an open-source project in January 2009.

A few interesting nuggets of information about Bitcoin:

Bitcoin has a dual legacy:

There are potential add-on fixes under development – but the bitcoin core (base layer technology) appears to stay relatively unchanged. This is a considered choice by the Bitcoin community: this choice aims to limit potential disruptions caused by a failed update and the resulting grave consequences. As a result of this, the Bitcoin core has proven to be very robust.

Lightning is a technology built on top of bitcoin that enables “lightning-fast” Bitcoin payments without worrying about Bitcoin’s slow transaction speed. Let’s have an analogy from traditional bank solutions: the interbank backbone network is secure but clumsy like Bitcoin, but fast and user-friendly services such as credit cards have been built on top of this core network.

Being stuck with first-generation crypto technology might be a long-term threat for Bitcoin.

But for now – with plentiful loose money around – the critical mass of speculative investors is producing record high Bitcoin values.

The second-most valuable crypto, backed by the largest number of developers and with the most applications. Computer scientist, lawyer, and cryptographer Nick Szabo published a white paper establishing Ethereum in 2013 and the project was started as an ICO in 2014.  This is an example of a successful ICO project with thorough background work. (A typical ICO project documentation could charitably be described as “a quick doodle on a napkin after a long lunch”.)

Ethereum is often called a second-generation cryptocurrency. The most significant technical difference to Bitcoin is its versatile programmability. Ethereum is truly the workhorse of blockchain technologies: for instance, 87% of the 5727 ICOs were implemented on Ethereum (there is nothing wrong with the blockchain technology of Ethereum; the problem with the failed ICOs was in their substance – or, to be more precise, the lack thereof). The applications described in the next installment of this blog are based on Ethereum.

There are already third-generation blockchain solutions on the market that are in some respects clearly more advanced and efficient than Ethereum. With the ongoing technology upgrade, Ethereum is expected to catch up with the competition. And unlike in Bitcoin, the changes and fixes are made directly into the core blockchain technology, i.e. Base Layer level. The upgrade, called Ethereum 2.0 is, however, a very challenging project and it remains to be seen whether it can be completed without major setbacks and on schedule during 2020–2023.

Tether is the most transacted cryptocurrency with an average daily transaction volume of nearly 100 billion US dollars (nearly 60% higher than Bitcoin which comes in second).

Tether is called a stablecoin because it was originally designed to always be worth $1.00, maintaining $1.00 in reserves for each tether issued. Nevertheless, Tether Limited states that owners of tethers have no contractual right, other legal claims, or guarantee that tethers will be redeemed or exchanged for dollars. On 30 April 2019 Tether Limited’s lawyer claimed that each tether was backed by only $0.74 in cash and cash equivalents.

The most significant difference to Bitcoin is the promise of a 1:1 exchange rate to the US dollar. This coupling of currencies seems to work at least in minor economic crises: Tether value stayed quite steady when the Covid-19 hit the market.

It is a real-time gross settlement system, currency exchange, and remittance network offering: “secure, instantly and nearly free global financial transactions of any size”. By 2018, over 100 banks had signed up, but most of them were only using Ripple’s XCurrent messaging technology while avoiding the XRP cryptocurrency due to its volatility problems. A Ripple executive acknowledged in 2018 that “We started out with your classic blockchain, which we love. But the feedback from the banks is you can’t put the whole world on a blockchain.”

My take on cryptocurrencies:

But it is going to be a very bumpy road.

And some governments are planning to protect their fiat currency and control of currencies in use:

I sold my Bitcoins during the previous peak in December 2017 and got a 60X return on my investment. If I had held on and sold them only now, I would have gotten a 200x return.

Part 2  of this blog post will focus on crypto and blockchain-based platforms, technologies, and use cases like Smart Contracts, Non-Fungible Tokens, and Decentralized Finance. All of them are key tools of digitalization, so stay tuned.