Entering the US: West Coast or East Coast?

This is the first post in a three-part series sharing some practical advice for tech startups considering a US market entry:

We’ve written about the US entry several times earlier (like this, this, and this)  but since this is an important topic, we think sharing our broad experiences makes sense.

There are several reasons why a tech entrepreneur should consider the US market, some obvious, others less so. Some of the most important ones include:

Despite these compelling reasons, the US is not for everyone and the decision to relocate there should not be made lightly as it is expensive, and the competition is cut-throat. This is a topic we will revisit in detail in the third installment of this series.

In popular lore, the US startup economy starts and ends in the San Francisco Bay Area (the term Silicon Valley is falling out of favor these days as the hotbed of the area is moving from the Valley to San Francisco proper). However, there is much more to the US, and there are often options that make more sense than the Bay Area.

Perhaps the most crucial consideration is the proximity to customers, partners, or critical ecosystems. Doing business is easier and more efficient if you are where the action is. Some food for thought: 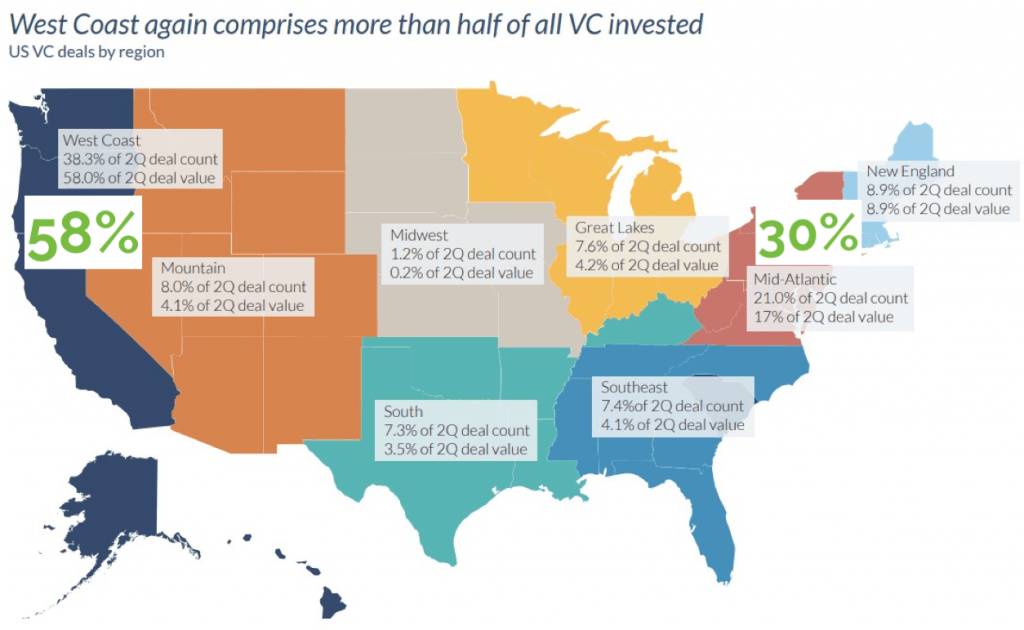 A further argument for being in the San Francisco Bay Area is VC money and big exit targets. The Bay Area has the most VC targets and the big exit targets (more than 10 of the Top 20 acquirers are located there). As for VC money, New York City is the number two area.

From a cost perspective, the Bay Area is far and above the most expensive place to be. Everything, especially top talent, is costly. Furthermore, the competition for the best talent is fierce – and we can pretty much guarantee Google or Facebook can pay top candidates more than you can, so you need to be creative and smart how you attract the right people. Even New York City is more affordable than the Bay Area, although often not by much.

If you want to keep costs reasonable and do not have to be in the Bay Area or NYC, some good options with much lower cost bases and still vibrant startup ecosystems include:

While the costs even in these locations can feel high compared to Finland (or anywhere in Europe with the possible exception of the UK), they are typically considerably lower than in the SF Bay Area.

Time zones might sound trivial, but they are everything but. In most cases, your R&D and perhaps some other functions stay behind in your country of origin. In Europe, we are used to being within a few time zones, and the time difference is not a big deal. But the time difference between, e.g. Finland and California is ten hours. This means there is no overlap in regular office hours and communication between the locations becomes an issue.

The time difference to the West Coast is much more problematic than to the East Coast – Europe and the US West Coast have practically no common office time.

If your US sales guy needs support at 15:00 California time, it is 01:00 in the morning in Finland which is hardly the time your engineers are at their sharpest or keenest to answer the phone. If your office is in New York (or elsewhere on the East Coast), the time difference is seven hours which is much more manageable.

Des Moines, Iowa (as an example) might be cheap and centrally located, but travel can be an issue. Both getting there from Europe and getting to customers from there are time-consuming and expensive which easily offsets any savings you might otherwise get.

While these operational matters should not be your primary concern, they need to be considered as well. If you have several potential locations that are suitable, operational efficiencies should undoubtedly be a part of the equation. And if you decide you need to be in California, make sure everybody in the company understands the communication barriers and is willing to put in the extra effort to overcome them.

One Is a Lonely Number

Entering the US market is a big decision and having support and guidance from someone who knows the pros and cons and has the battle scars is invaluable. If you are running a high-growth startup and are considering growing in the competitive US market, we’d be happy to talk with you. We have helped our portfolio companies to succeed in the US numerous times, and we are more than happy to share our experiences – both good and bad – and help you make the right choices.

In the next installment, we look more in-depth behind the large market and discuss the importance of a razor-sharp focus instead of trying to do too much at once, which is often a recipe for disaster.