One of our portfolio companies, Ekahau, was acquired last fall by Ookla, the global leader in internet testing, data, and analysis.

We thought that now, when the dust has settled a little bit, is the right time to take a bit more comprehensive look at the history of Ekahau and how we applied the Activist VC principles and used the Transatlantic approach to support the team to the success.

From Idea to Company

The idea and core concepts behind Ekahau came from the Complex Systems Computation Group (COSCO) of the Department of Mathematics at the University of Helsinki. Prof. Henry Tirri and Dr. Petri Myllymäki along with their team were working on a then-obscure branch of probability theory called Bayesian networks.

The COSCO team came up with the novel idea that they could use a Bayesian approach to provide very accurate positioning of cellular phones, a topic which was very hot at the time because of the fast growth of mobile phone penetration and pending legislation requiring positioning technology.

Prof. Tirri knew our Artturi Tarjanne from earlier artificial intelligence projects and contacted Artturi regarding the positioning technology when he started hearing rumblings about Artturi working on a venture capital company.

Shortly after Nexit raised its first fund, Ekahau was started. The team filed the paperwork and transferred their patent applications to the company. Nexit made an investment into the company and started a concerted incubation process.

The first Ekahau office was at Nexit premises and the first CEO was a Nexit employee responsible for developing portfolio companies. Our Jussi Mononen wrote the first proper business plan, laid the groundwork for starting the operation, and then found the first permanent CEO, Mr. Jari Parantainen.

The market changed fast and fundamentally during the second half of 2000. Global VC funding froze up as the techno-bubble burst. To compound this, operators spent globally hundreds of billions acquiring 3G licenses.  These investments emptied the coffers of the operators and made them focus purely on short-term profitability and shedding the huge debt load for coming next few years.

This combination was very bad news for Ekahau: its primary customers were operators which had been initially very interested in the positioning technology. It become fast quite evident that any investments in the new technology were out of the question. Furthermore, GPS was slowly finding its way to high-end cellular phones.

Ekahau management team (which still had a Nexit employee as the head of strategy) concluded that the company would not survive if it tried to follow its initial path. The underlying technology developed by the COSCO team was, fortunately, robust and flexible and it could be used in other networks apart from cellular.

The Ekahau team decided to abandon the GSM business and refocus the company on WiFi and indoor positioning (also called Real-Time Locations Services or RTLS). This was a big leap of faith but Nexit also saw the necessity of the change and the management team made a good case why the new direction would be a better bet than staying on the GSM track.

The Emergence of ESS

By 2002, Ekahau’s focus was fully in WiFi RTLS and the company had some promising prospects (including giants like British Petroleum) and a few initial customers. The management team, headed by a new CEO, Mr. Antti Korhonen, came up with the idea to create a commercial site survey tool based on internal tools developed at Ekahau. The idea was presented to the Ekahau board in late 2002 and with the board’s approval, ESS (Ekahau Site Survey) was launched in 2003.

This tool was the core of the business that enabled the 2018 exit and the preceding fast growth.

Into Health Care and flip to the US

Ekahau did a major exercise to identify the most promising segments to focus on, and it soon became apparent that the best prospects in were in health care – a very large segment with numerous applications for RTLS. 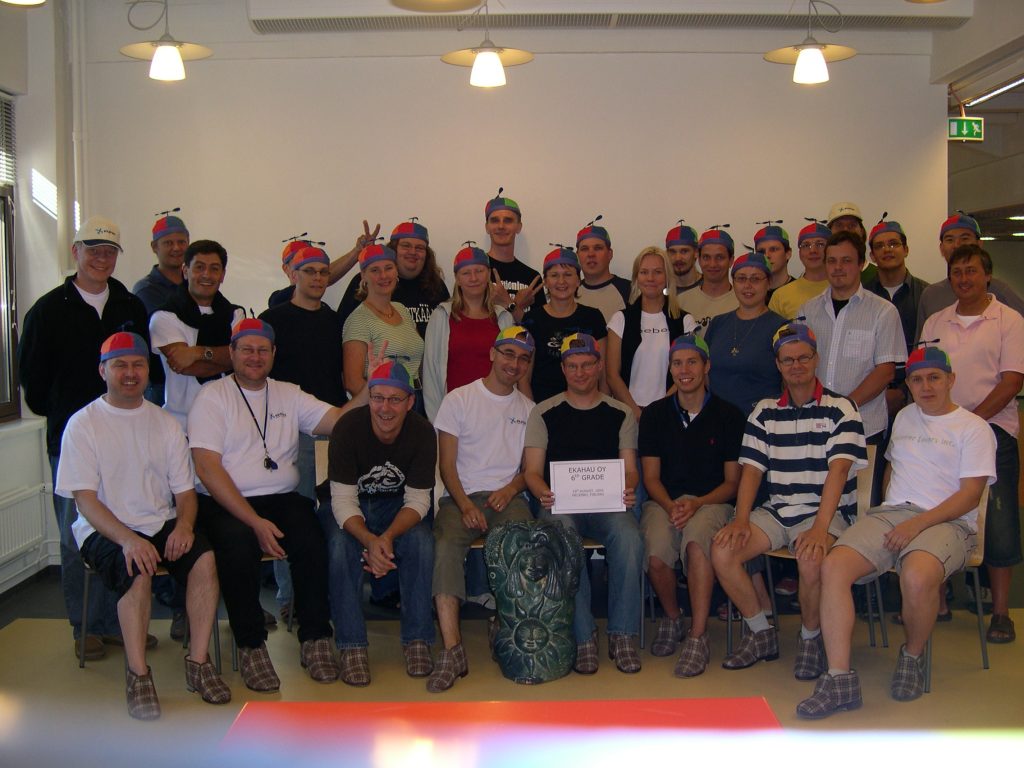 The merry Ekahau pranksters around 2005. Note the statue of Ekahau himself front and center.

The US health care market was by far the largest single opportunity and was also already using Wi-Fi networks actively. The focus of Ekahau operations was soon moved to the US, supported by the Nexit Transatlantic Bridge. Michel Wendell, our US partner, joined the board as part of the US penetration project. Key customer-facing staff was mainly located in the US while it was decided to keep R&D in Finland.

The US market feedback convinced the management to develop a WiFi “tag”, a small, inexpensive and robust device that could be attached to equipment and event people, thus enabling tracking them. In 2004, the first Ekahau Tag was launched. Shortly thereafter, the company made the largest deal of its history (over USD 300k) with Carolinas HealthCare System, validating the new direction.

The RTLS business grew fast and Ekahau formed partnerships with major players such as Nortel Networks, 3M, and Siemens. Market analysts were also very keen on the RTLS business and they predicted it would grow fast into a multi-billion dollar industry.

Another stretch of bumpy road

Just when things were looking good, the credit crunch of 2008 struck and US customers stopped their RTLS investments practically overnight.

In 2009, Ekahau went through a very painful round of layoffs and rationalization to make sure the company survives. Our Michel Wendell took over as the chairman of the board and Risto Yli-Tainio took over as interim CFO to help the company stabilize. There was still some serious optimism around: analyst estimates were predicting a rosy future and very fast growth for the RTLS market.

By 2013 – the repeatedly upbeat market predictions of analysts notwithstanding – the situation had not improved much. The RTLS market and Ekahau business grew steadily but rather slowly. The sales and marketing push started earlier didn’t bring the desired results in the now crowded market – the rosy analyst reports had generated a steady flood of new VC funded RTLS entrants, all competing for the fairly limited market.

We executed a funding round in 2013 that arguably saved the company. The round was not a pleasant one as old shareholders that could not participate in the round were diluted quite significantly. However, the pay-to-play structure was required to make the funding round possible and the alternative would have been considerably worse.

In late 2013, our Michel Wendell took over as the CEO to stabilize the company and refocus it on the ESS business, despite analyst recommendations.

Under Michel’s leadership, Ekahau went through a round of major cost-cutting, bringing the number of staff from 100 to just over 50. A business plan for a standalone ESS business was created and the process of divesting the RTLS business was started.

In 2015, the ESS business outstripped the RTLS business and had become the main source of growth for Ekahau.  After working with nearly 20 buyer candidates, Ekahau finalized the RTLS divestment with Airista in early 2016. The new Ekahau, focusing solely on the ESS business had just 32 employees, led by Mika Hakala, who was selected as CEO in April 2016. (Mika was a trusted playmaker from another Nexit portfolio company Hantro that Google had bought).

And the Rest Was History

The 30-month period between the RTLS divestment and the exit of Ekahau was characterized by fast growth. The management team concentrated in growing the business, developing the Ekahau Sidekick hardware module, and moving the business towards the cloud and a SaaS-based business model.

The Nexit team continued providing active support in the background. The Airista deal raised Ekahau’s profile and generated several attacks from patent trolls which were handled by Nexit’s Michel Wendell to let the management team use their time to grow the business. A prime example of Activist VC thinking – help the management to focus purely on the core business while we clean up the other fronts.

In 2017, we started preparing for the exit. Victor Basta from Magister Advisors was retained as the investment banker to help build the optimal exit position and find the best buyer candidates.

Growth accelerated in early 2018 and we received several initial offers from prospective buyers which helped us pit these candidates against each other and look for a higher exit valuation.

Because of the strong business performance of Ekahau (the management team met and beat the aggressive growth targets we set in early 2018), we were able negotiate from a position of strength and we actually left the negotiating table a few times when we were not satisfied with the offers. Finally, we got the right offer and closed the deal with Ookla in October of 2018 (whom our Sami Karppinen had identified as a potential buyer in late 2017).

We believe the Ekahau saga is a good example of our Transatlantic and Activist VC approach:

In line with our Activist VC principles, Nexit had a large ownership stake and two partners actively supporting Ekahau. This gave us a deeper understanding of where the business really was and enough decision-making power to make fast moves when necessary.  A key tenet of our approach is helping make and execute the painful decisions when necessary and taking a long-term view with company development. We can take an operative hands-on approach when it is required, but in most cases we are happy to keep in the background yet providing support: the most important success factor of a startup is the management team – not the VC.

Was the Ending Happy?

We made investments in Ekahau from two of our funds and the results were mixed: