From a humble beginning in 2014, ICOs (Initial Coin Offerings) have become a major boom in startup funding: the global ICO volume during 2017 was about $6 Billion.

This number is still far below VC activity which was over $160 Billion globally in 2017. However, when we consider that less than 10% of the global VC money flows to seed stage companies (which ICO issuers tend to be), the disparity becomes far smaller. And if we compare ICO dollar amounts to combined reward and equity crowdfunding, they are roughly in the same ballpark.

This is a staggering development: ICOs have become a major source of early-stage funding in just four years. 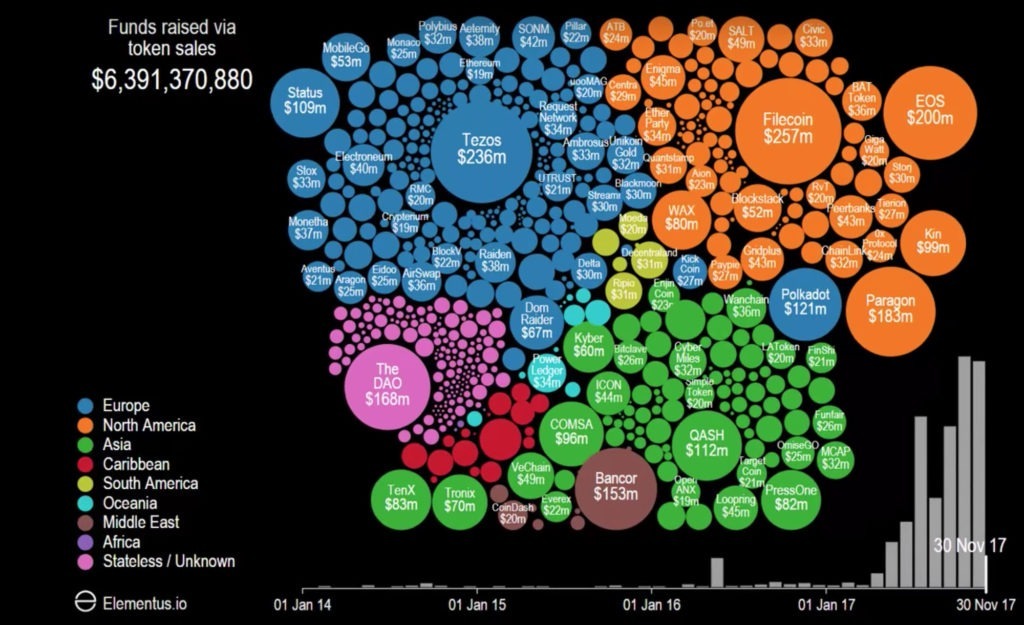 $6 Billion raised in token sales  during 2017
(check the great animation by elementus.io)

The name ICO is a bit of inspired marketing as it reminds us of IPO – the holy grail of startup game. There is a fundamental difference between ICOs and IPOs: token holders do not own any equity in the company that they’ve invested in. ICO tokens can sometimes represent some level of right of ownership to a company project and its royalties – the control of the company and value of the company stays with the shareholders.

According to a recent study, up to 85% of ICO projects were in pre-seed and seed rounds using Venture Capital standards: 65% of the companies did not have a product and 75% had not had a sale.

The average funding raised by ICO ($19M) is about three times the average VC deals in similar stage. Raising of great amount of funds in the first funding round might give some extra room for errors and pivots but it is certainly not a Lean Startup method.

What makes this especially worrying is that only 10% of ICOs provided roadmap milestones and financial models that demonstrated the total funding need and only 50% of them had clearly specified their fundraising cap, ignoring the fact that non-working surplus funds tend to decrease investors’ returns.

Even the best ICO projects with an operating product and ready for entering the market often do not disclose high quality financial information: revenue projections backed up with metrics and funding needs.

While there have been some outright scams (such as the infamous Prodeum ICO), purposely fraudulent ICOs are likely a very small minority. A bigger risk is the apparent irrationality of the promises made by the projects combined with the underlying huge volatility and illiquidity of the tokens granted during the ICOs.

The director of the MIT Media Lab, Joi Ito, summed up the risks of ICOs rather succintly in a recent Wired Magazine article: “My concern with today’s ICOs is that they’re being fueled by the gold-rush mentality around cryptocurrencies, and so are deployed in irresponsible ways that are causing harm to individuals and damaging the ecosystem of developers and organizations. We haven’t set up the legal, technical, or normative controls yet, and many people are taking advantage of this.”

Participating in an ICO might be risky for the investors, but what about the companies? Isn’t an ICO a great and essentially risk-free way of getting a large amount of early-stage funding – without giving up equity?

Possibly yes but the ICO way is not entirely without risks for the companies, either. An ICO is likely to attract passionate, vocal, and opportunistic investors. In many cases, the investors may be after a quick win without even really grasping what they are investing in. If things do not go well (and even when the problems are not really the company’s fault), the company may suffer serious reputational and public relations damage: while ICO investors may be passionate and vocal, disappointed ICO investors can be doubly so. The taint of a failed ICO may last for a long time.

Futhermore, ICO investors do not provide any of the support, advise, and added-value services a VC (and especially an Activist VC) can offer. While money can take you a long way, many successful entrepreneurs say that the support of a seasoned VC during strategic shifts, seeking further funding, and finding a good exit are extremely valuable.

As you can see, we think the jury is still out on ICOs. They are an extremely intriguing phenomenon but ICOs are still in their infancy and have teething problems. We will track them with great interest to see how the ICO boom pans out in the long run.