The noted US-based venture capitalist Mary Meeker is rightfully considered one of the brightest minds in tech. Her annual Internet Trend Reports are exciting and essential reading, but they have one slight drawback: they are very long. The 2019 edition published a few days ago is no exception: it consists of no less than 333 slides.

In keeping with time-honored Nexit tradition, we have pored over the report, gathered some of the key findings, and added some commentary of our own. Below is the first part of our summary that covers roughly the first half of the report. Will we publish the second part with the Nexit commentary next week.

BTW, should you find the summary interesting, we recommend taking the time going through the whole report in its full glory

Nota Bene: the data in the report is quite US-centric with some data about China and India thrown in. In Mary Meeker’s world, Europe is definitely the ugly stepchild…

For the first time in history, more than 50% of the world population (51% or 3.8 billion people, to be exact) used the internet in 2018. The growth is slowing down, though, as the number of users only grew 6% from 2017. But even with this growth rate, we are likely to hit 4 billion users this year.

Smartphones are the world’s most popular way of accessing the internet, but mobile phone sales is slowing down. People simply do not want to – and in many cases cannot afford to – replace the phones as quickly as they used to.

Currently, 7 out of the 10 most valuable companies in the world by market cap are tech companies. The Top 10 consists of::

Out of the tech companies, Microsoft and Apple are relative old-timers as they were founded in the 1970s. The rest are products of the 1990s or even the 2000s. We believe this is proof positive of the transformative power of technology.

This has already happened in some developing markets but the trends strongly suggest that in the US, mobile usage will surpass TV time during 2019.

Furthermore, 88% of TV audiences use a second digital device (typically a mobile) while watching TV. These two factors combined are likely to have a profound effect on advertising and ad spend may keep shifting towards mobile even faster than expected (already in 2018 internet ad spending grew 22% in the US, outgaining by far the ad spending increases in other media).

While e-commerce grew at a brisk 12.4% pace compared to 2017, the growth in China was clearly stronger: 17.8% (to be fair, also physical retail grew much faster in China than it did in the US).

While the US has traditionally been the cradle of innovation in e-commerce, some Chinese players such as Pinduoduo (direct-to-consumer) and Meituan Dianping (connecting local small businesses with consumers) are now driving the innovation. Also, companies like Rappi (Colombia) and Tokopedia (Indonesia) are reimagining what delivery and fulfillment businesses should be and growing like wildfire as a result. 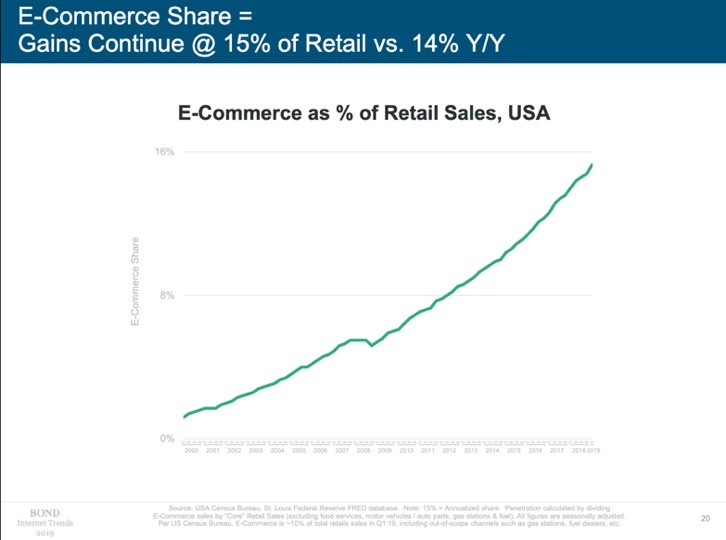 Internet ad spending is increasing at an accelerating pace, driven mainly by mobile advertising which has now grown to nearly double the amount of desktop advertising. This development follows the usage trends of desktop vs. mobile. 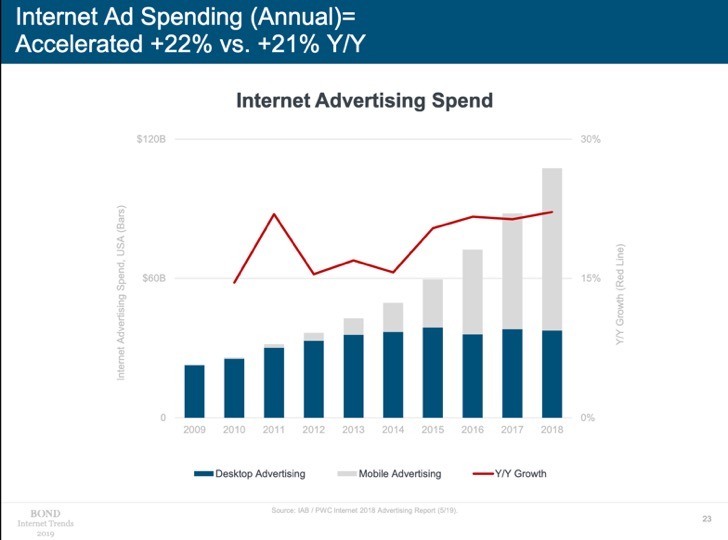 Because of the increasing advertising, B2C competition is tighter and customer acquisition costs (CAC) are constantly growing – in 2017 the global average CAC was $30 and it is expected to be $45 in 2019. Reaching customers in a cost-efficient manner is getting more and more difficult.

The Power of Images (and Video)

The old saying goes: “A picture is worth a thousand words.” This seems to hold on the internet, as well. More than 50% of Twitter tweet impressions are now images or videos. The fastest growing internet platforms are Instagram and Youtube. Nearly 1.5 trillion (that 1.5 times 10 to the power of 12!) photos are going to be taken this year – and the bulk of them are going to be posted online, whether we want that or not.

Pinterest is now worth more than $15 billion. And Bytedance, the company behind the TikTok video app, is valued at around roughly $75 billion.

We will continue the story next week and cover topics such as big data, privacy, security, and how the internet is transforming traditional businesses other than media and commerce, as well. And, of course, next week’s installation will include our commentary and take on the trends.