VC in Europe: Finally Growing Up

Invest Europe just released the annual European VC and PE activity report called “2017 European Private Equity Activity“. Since we looked at the State of VC in Finland in this blog a few weeks ago, we thought it also makes sense to take a European-wide view on the VC activity as well.

The Industry Grows Up (Finally!)

In 2017, the European VC fundraising continued the positive swing reaching  7.7 billion euros (but slightly below the 2016 record of  8.2 billion). Two important notes of the long-term development:

Both are strongly positive and important news for the VC industry. The post-dotcom hangover has plagued the industry for more than a decade and European VC funds have typically been rather small with a large majority very dependent on government support.

The recent much-improved VC performance has clearly activated more private actors to the asset class and many prominent institutions are getting over the bad VC experiences coming from the dotcom era. This means European venture capital is finally growing up: into an independent and profitable asset class. 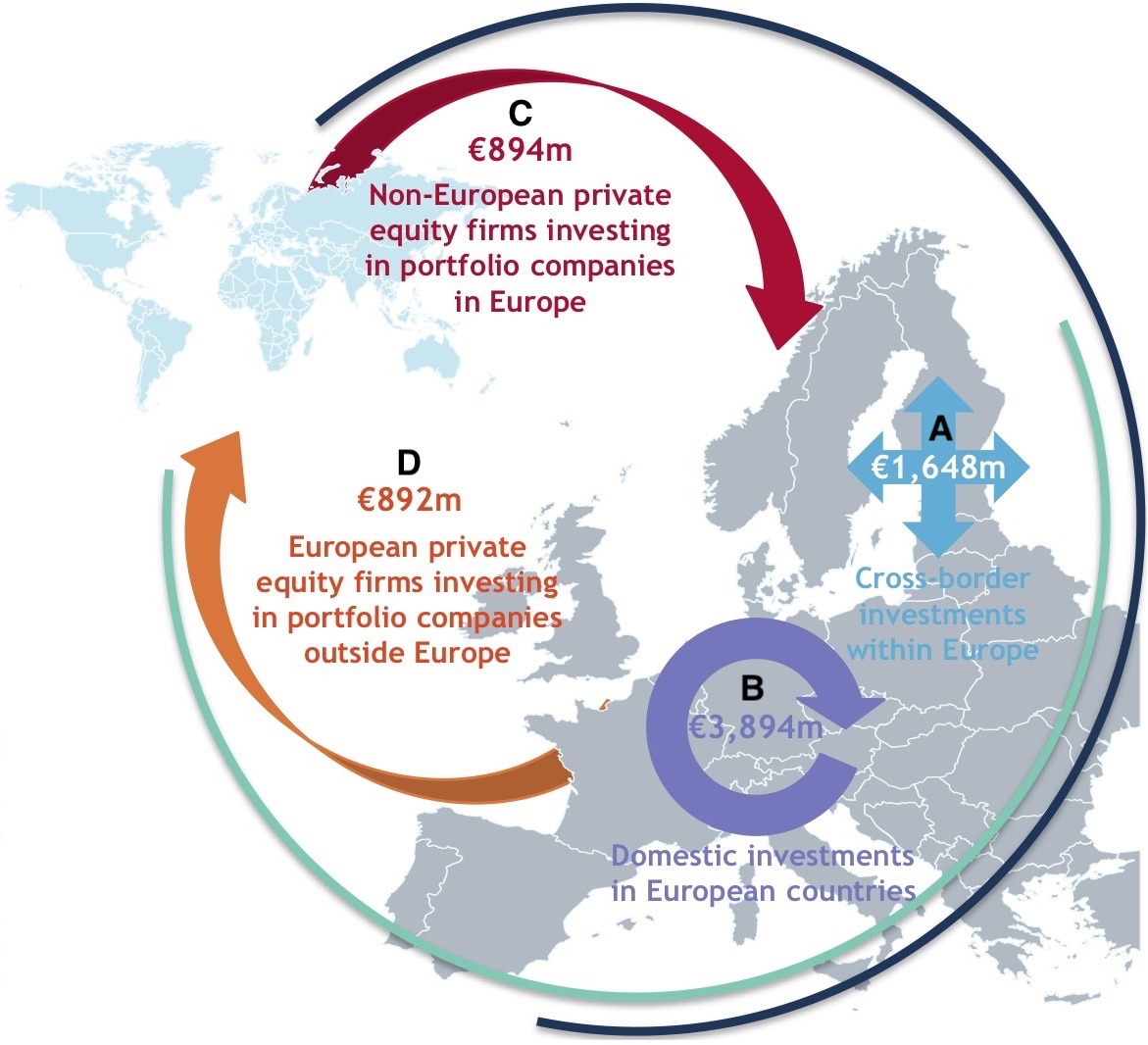 A record year in Europe for investments

When we look at VC investments, an important distinction needs to be made:

We believe that from a European macroeconomic perspective (wealth and job generation in Europe), the market statistics are more significant and therefore we tend to focus on those.

Seed and startup investments grew almost 50%, reaching €649m and €3.5bn respectively. The early stage is an area where Europe differs from the US, as over there the investments tend to flow towards later stage companies. This is another statistic that augurs well on the long-term development of the European VC industry. 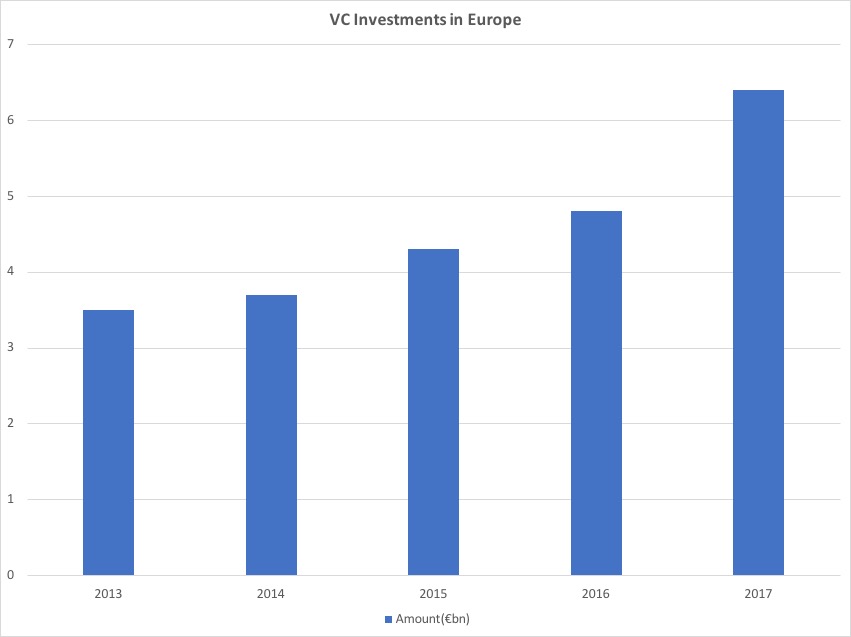 ICT was the largest sector, receiving 45% of the total VC investment amount, followed by biotech and healthcare (23%) and consumer goods and services (8%).

The proceeds from exits of VC-funded companies have remained relatively stable since 2013. What is changing, however, is the average size of an exit: in 2017 the average exit brought in 20% more money than the average exit in e.g. 2015. 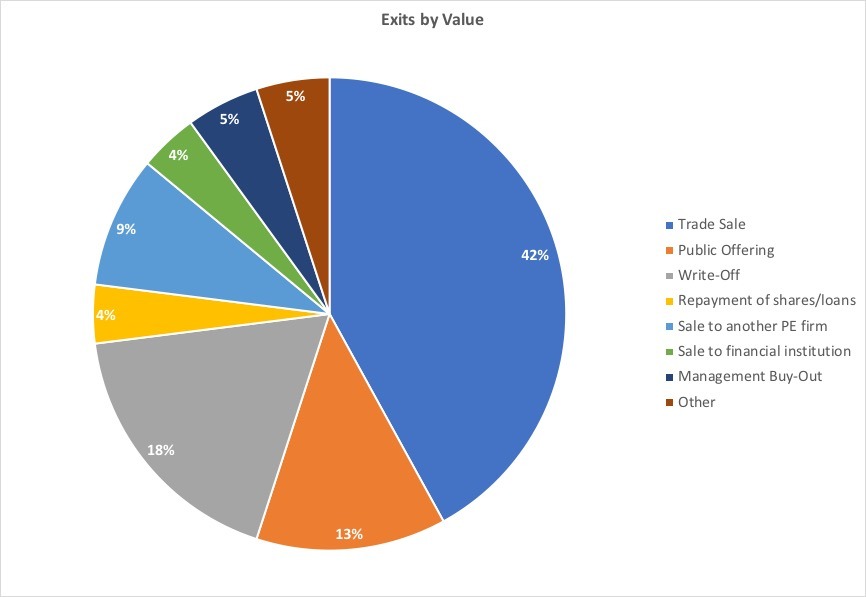 From a value (Euros generated) perspective, trade sales were by far the dominant exit route with over 40% of the total value generated. While IPOs brought in considerably less money, their share grew by 60% indicating a strong growth in European IPO activity.

While the performance of VC in Europe has caught up with the US, the levels of VC investments are still very low. The study indicates the VC investment level as a percentage of GDP in Europe is roughly 0.04% while the figures in the US and Israel are 0.38% and 0.34%, respectively (these numbers come from the OECD). This is almost an order of magnitude difference! Even the best performer in Europe in 2017 – the UK – reaches only 0.075%, one-fifth of the US levels.

This is where Europe faces a challenge – and has an opportunity. VC is a proven catalyst of growth and much needed structural change (think creative destruction) that has created huge amounts of new jobs, tax revenue, and wealth during the past decades, especially in the US. Europe is seen (at least partially justifiably) as a laggard in economic renewal and growth. While VC investments are by no means a silver bullet that alone can solve this problem, the evidence is very strong that increasing investments into VC funds provide strong results on a national and even continental level. 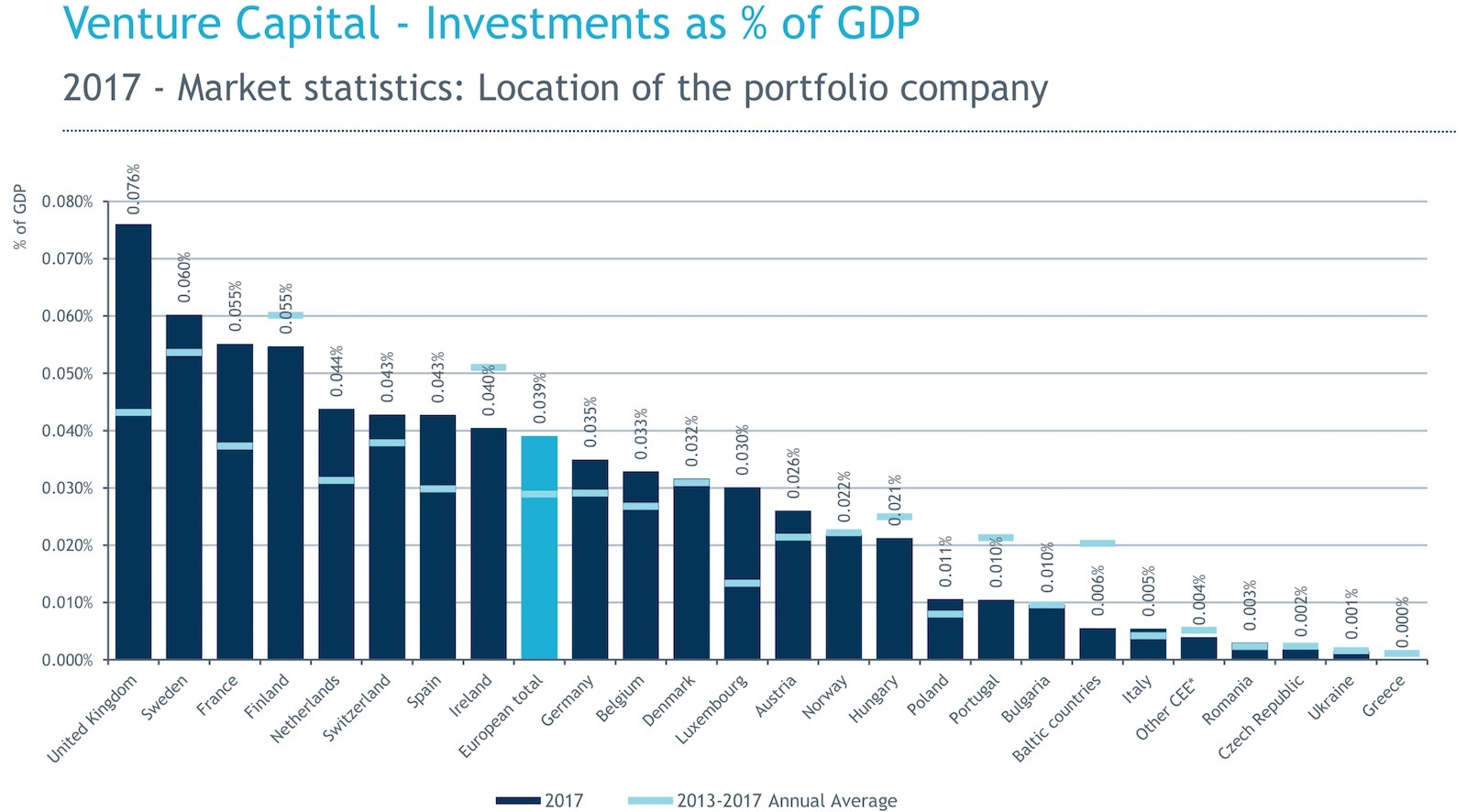 Investments into European startups as a percentage of GDP: Finland is #4

When we look at investments by Finnish VC firms (industry statistics), the picture is somewhat less rosy: we are actually below the European average and we are falling further behind (our 2017 figure was below the 2013-2017 average). 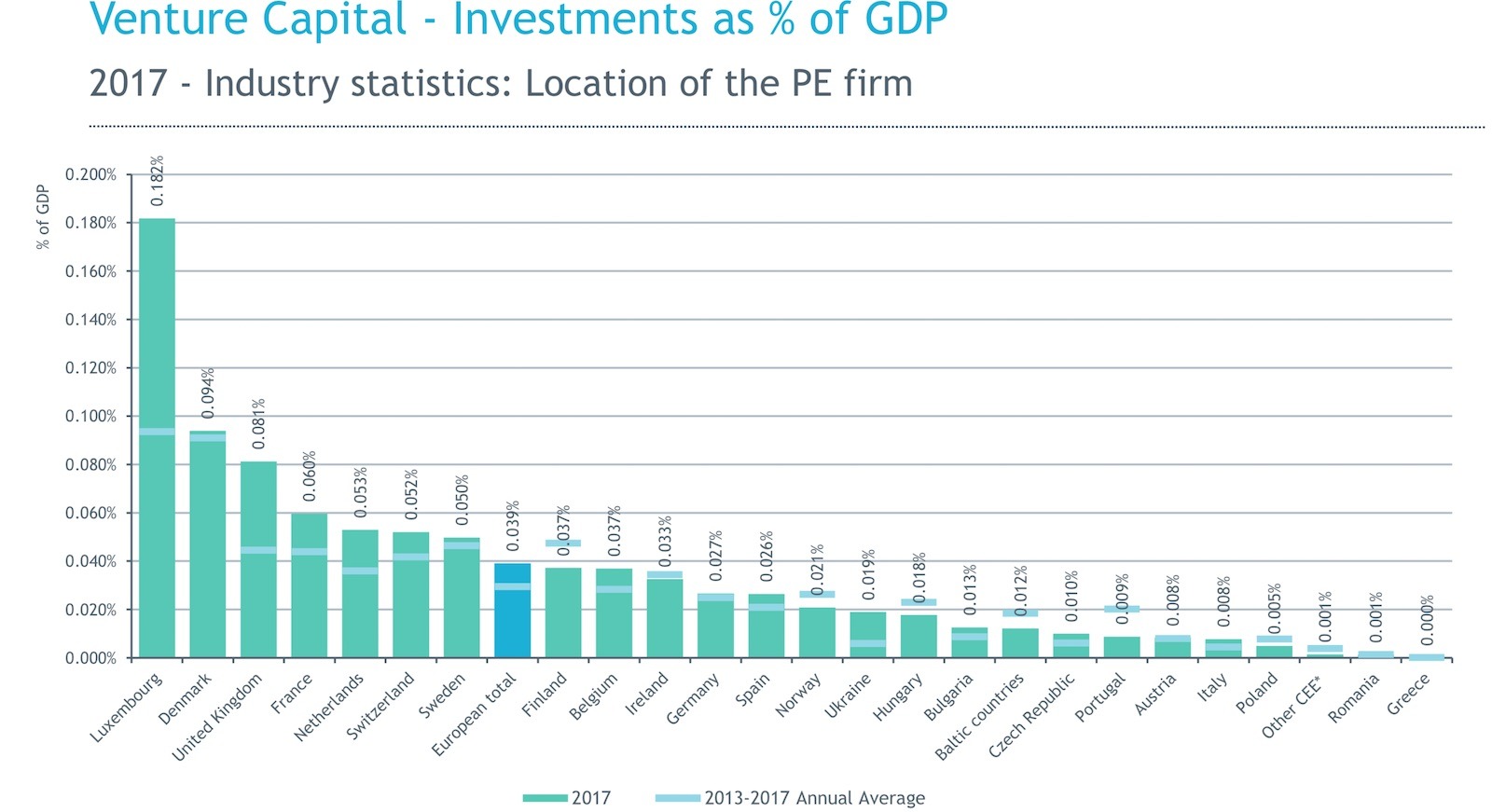 Investments by European VC firms as a percentage of GDP: Finland is slightly below average

While the reasonably high level (by European standards) of investments into Finnish startups is encouraging, the investment activity of Finnish VC firms is not. As we have stated in earlier blogs, there is ample evidence that a vibrant local VC scene is vital for a healthy startup ecosystem and – consequently – rapid overall economic growth and transformation.

And as said before, we believe the future is quite bright. Growth entrepreneurship is extremely hot amongst well-educated youngsters (both in Finland and also in Europe in general). If this trend continues, who knows how these statistics will look in a few years’ time…