Well, it is that time of the year again: numbers and studies about the VC trends and market in 2021 are now mostly available. Adhering to our tradition, we have read the reports (see list of the reports at the end of this post) and done the heavy lifting for you:

(BTW, you can also read our year-old analysis of the 2020 numbers and predictions for the year 2021.)

Another record year for Venture Capital

The last 12 or so years have been a wild ride:

This 12+ year rally of tech stocks (i.e. Nasdaq went up 1278%) has made an extreme impact on the Venture Capital market.

VC activity in Q4 2021
1. Dollars invested: The US volume is larger than Europe and Asia combined
2. Number of deals: Asia had more deals than the US!
Source: CB Insight Report Q4 2021

Another dimension of the strong VC scene is the robust performance of VC funds. When compared against other private capital asset classes, Venture Capital outperforms them on all but the very shortest horizons (based on the latest available data as of Q3/2021). Especially notable is how VC outperforms Private Equity on both short and long horizons. 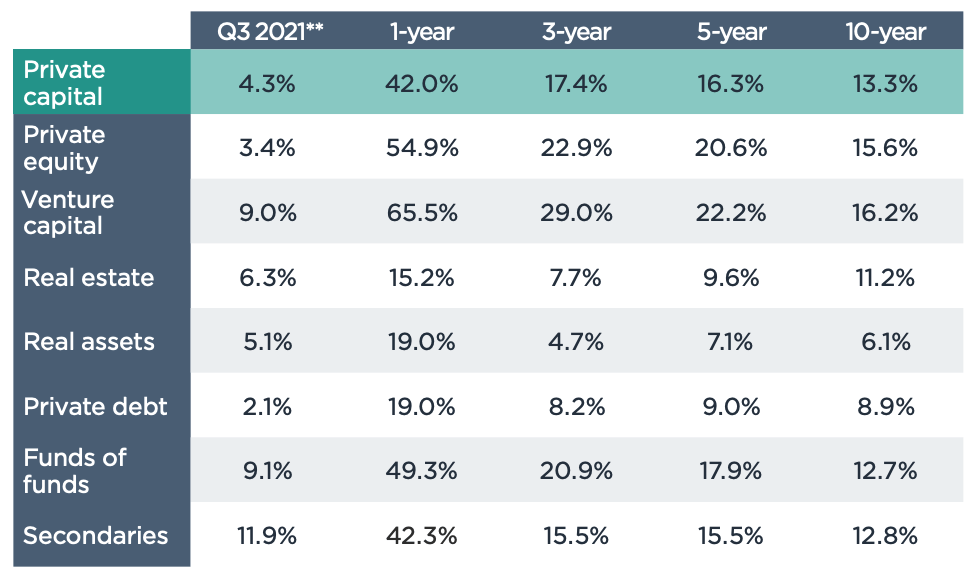 Breaking Down The Big Picture

While the year was characterized by fast growth in the overall dollar volume, a more granular look at the market reveals some interesting details, as shown below.

The most significant single phenomenon behind the massive growth of VC funding was the even faster growth of the very large $100M+ mega-rounds. In today’s market, the VC and PE funds provide much of the pre-IPO funding themselves and the late rounds are massive in size.

The increase in the number of Unicorns was driven partly by high valuations supported by the peer groups created by the public market. (In some cases, the unicorn valuations have been a bit dubious, as the amount of money invested in those rounds has been smallish and made purely by existing shareholders.) 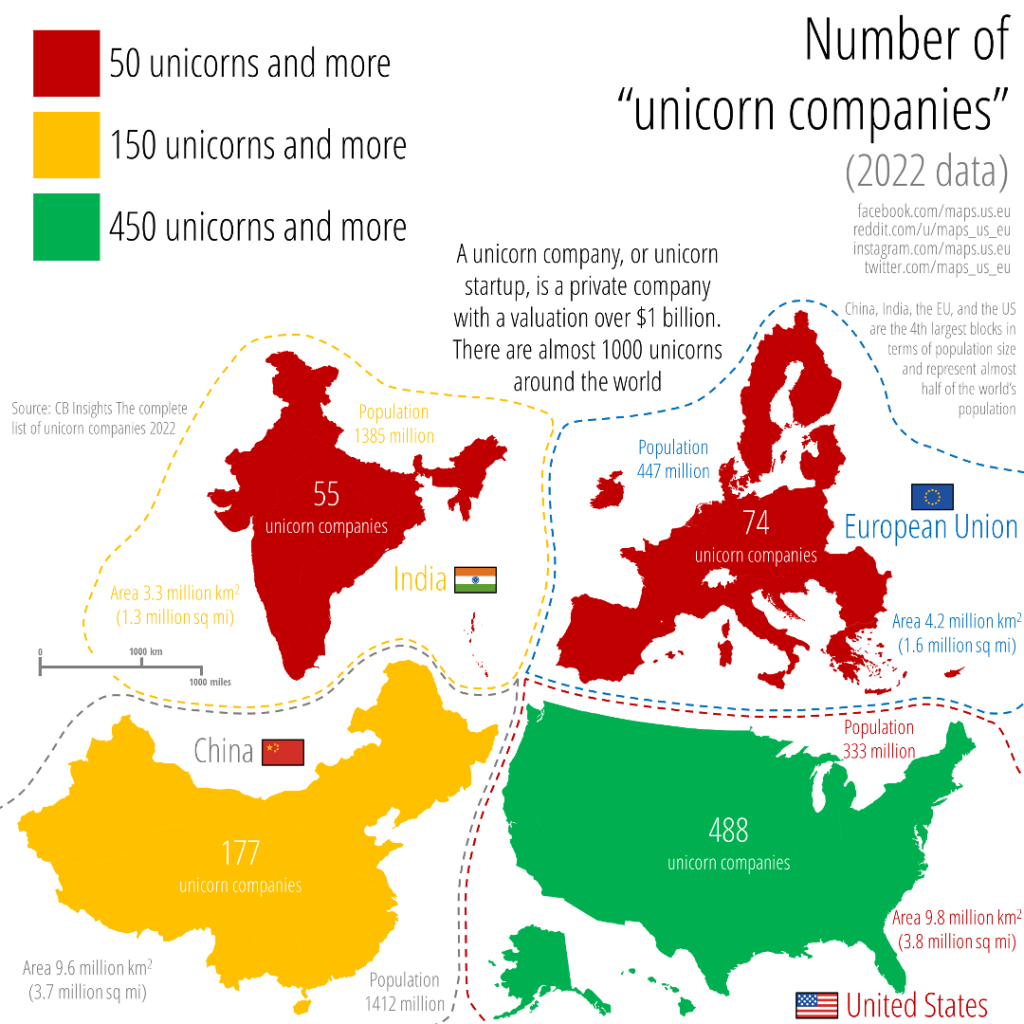 Countries and areas with the most unicorns
Source: CB Insights & https://www.reddit.com/user/maps_us_eu/

The number of VC deals has grown relatively steadily on a quarterly basis since early 2020 and was nearing 10,000 deals until the growth stalled in Q4 of 2021. However, there are two interesting data points:

The higher valuations, mega-rounds, and unicorns naturally push the average and median deal size up in all regions.

The Most Active Sectors: Fintech Leads the Way

Fintech also saw the highest proportion of early-stage deals of any industry, indicating that the sector is ripe for an explosion in 2022 and beyond as startups mature.

Other important active segments include:

Artificial intelligence and machine learning continue to dominate as important technology trends but we seem to have passed the AI hype peak, at least for the time being. According to Google Trends, searches for ‘machine learning’ are declining and searches for ‘AI’ have been flat for the past 18 months.

The importance of ESG (Environmental, Social, and Governance) considerations kept rising in 2021. The consumer pressure towards larger firms to take more action has moved downstream to VC investments, and VC investors are increasing their use of ESG metrics to shape their investment decisions. A further key reason for the emphasis on ESG is the growing importance of ESG stories for companies looking to go public.

The scope of ESG-specific VC investments has also grown, with an increasing focus on net-zero or low emissions technologies across sectors such as food and hydrogen-related investments.

Heading into 2022, there will likely be increasing investments in ESG solutions and tools to help both companies and investors track, measure, and report their results.

Digital transformation has become a must-have for companies across all industries, leading to a rise also in M&A activity.

The growth was not stable, though. There were a staggering 298 SPAC IPOs completed in Q1 2021, but the number declined sharply: 60 in Q2, 89 in Q3, and 166 in Q4. The slowdown was caused by increasing SEC scrutiny and more difficult PIPE market conditions.

There were 274 SPAC mergers (the majority in the tech sector) and there are still nearly 570 SPACs with $134 billion looking for mergers within the near future.

However, this SPAC money available does not have a strong direct impact on the VC Exit market as VC-funded companies are more likely to take the traditional IPO route than the faster but more expensive SPAC path. Creating a SPAC is not that expensive per se, but the SPAC teams take typically a hefty price for running the show.

Unsurprisingly, the bulk of European VC fundraising in 2021 took place in the UK & Ireland, DACH, and France & Benelux ecosystems. These three regions contributed €16.7 billion – equivalent to 76.6% of the aggregate capital raised across Europe. 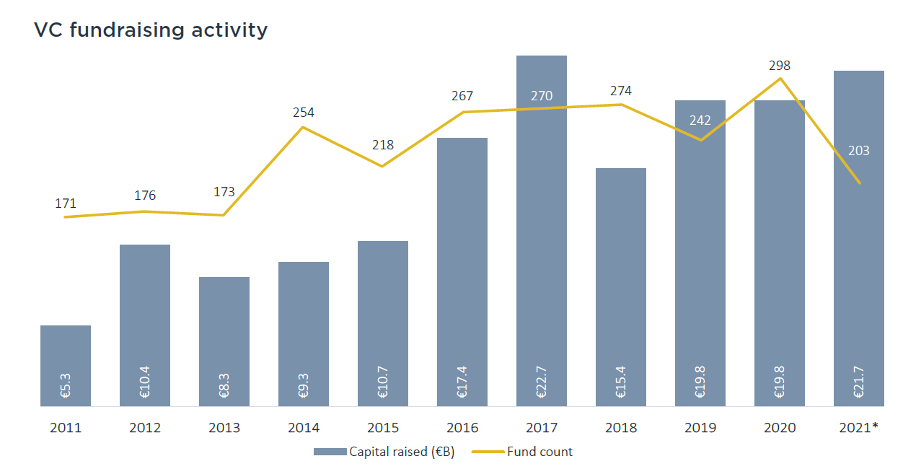 Fundraising in the US

In the US the number of new funds raised remained steady (slightly over 700) in 2021. However, multiple large firms were able to close on record-sized funds, leading to nearly $130 billion raised in the US throughout the year. This very large inflow of money might exert upward pressure on the market from funding rates and valuations. Whether the investors exhibit discipline or not is anybody’s guess at this time.

A Quick Note on VC statistics

Overall, VC investment figures are becoming harder and harder to consolidate. On the surface, it appears investments made by VC funds outpaced funds raised by VC funds by a large margin. There are a few notable reasons for this:

This variance makes apples-to-apples comparisons a bit difficult and should be kept in mind when comparing the different figures.

In summary: It Was a Very Good Year

The year 2021 turned out to be an exceptionally good year for VC on almost all fronts. This was no surprise: the low interest rates and loose fiscal policy kept stock markets rising and we saw an all-time high for Nasdaq in November of 2021. With the digital transformation progressing along widely on many fronts, the global component shortage or even the rise of Omicron could not spoil the party.

Even though tech companies’ growth and earnings were strong, we started seeing valuation levels that we find unsustainable in the long run.

So what is next – what will the year 2022 bring with it? Stay tuned for our next blog where we offer some analysis and predictions for the coming year, including our analysis of the effect of the elephant in the room – the Ukraine war.

Please, sir, I want some more

Below are some of the key reports and publications we used to source the information above. Enjoy yourselves in getting your fill of additional information!