The Globalization of VC Activity

While the eyes of the startup world are still on Helsinki after the tech love fest that is Slush, it might be the right time to look at what is happening in the global VC scene and how it is progressing.

As we reported earlier, the VC business in Europe is catching up with the US performance-wise, the volume of the VC activity has been heavily weighted towards the US – especially the San Francisco Bay area.

A new study called “Rise of the Global Startup City” by the lobbying arm of the US venture industry, Center for American Enterprise (CAE), indicates the rest of the world is catching up with the US. We encourage you to read the full study – some of the visualizations are superb. However, should you be busy, below you can find some highlights and our conclusions of the study.

US – The Dominance Challenged

The study shows that venture capital activity is globalizing at a fast pace. America’s traditional dominance is being challenged by the rapid ascent of new startup hubs in Europe, China, India, and elsewhere.

The U.S. still remains the clear global leader, but the old adage that successful startups must launch and scale in the San Francisco Bay area is not necessarily true anymore. Ambitious tech entrepreneurs are able to stay in their home city or nation and raise venture capital without making a pilgrimage to the US and contribute to their local economies.

China – The Heaven of Mega Deals

Maybe the most interesting data point is the strong imbalance between the megadeals and seed/angel stage activity. Example: while Beijing boasts 14% of the total amount of VC money invested, it only features 1.5% of the number of deals – the earlier stage VC activity is very weak. The only Chinese city in the top 50 on the angel and pre-seed activity is Beijing – a distant #40 on the list, far behind e.g. Stockholm and Helsinki.

The Asian VC market is heating up outside of China as well. In fact, the top ten cities for venture capital deal number growth are all from Asia (and outside of China). While some of this can be contributed to a very low baseline, the trend is unmistakable. The top ten includes cities such as Bangkok, Jakarta, Ho Chi Minh City, and Kuala Lumpur.

Another unmistakable trend is the rise of India. Long considered a source of low-cost engineers and customer support with a funny accent, India has become a global force in both the number and total volume of venture capital deals. Lead by Delhi and Bangalore, India features other rising cities such as Ahmedabad, Kolkata, Pune, and Mumbai. While India as a whole is not on the level of China yet, it has a more balanced ratio of deals and deal volume and more cities on the fast growth list.

Europe Is a Mixed Bag

Europe, unfortunately, is not doing quite as well. London is the only city in the top 10 of VC capital investments (albeit Berlin is #12) and we are falling behind in both number of deals and volume of funding. 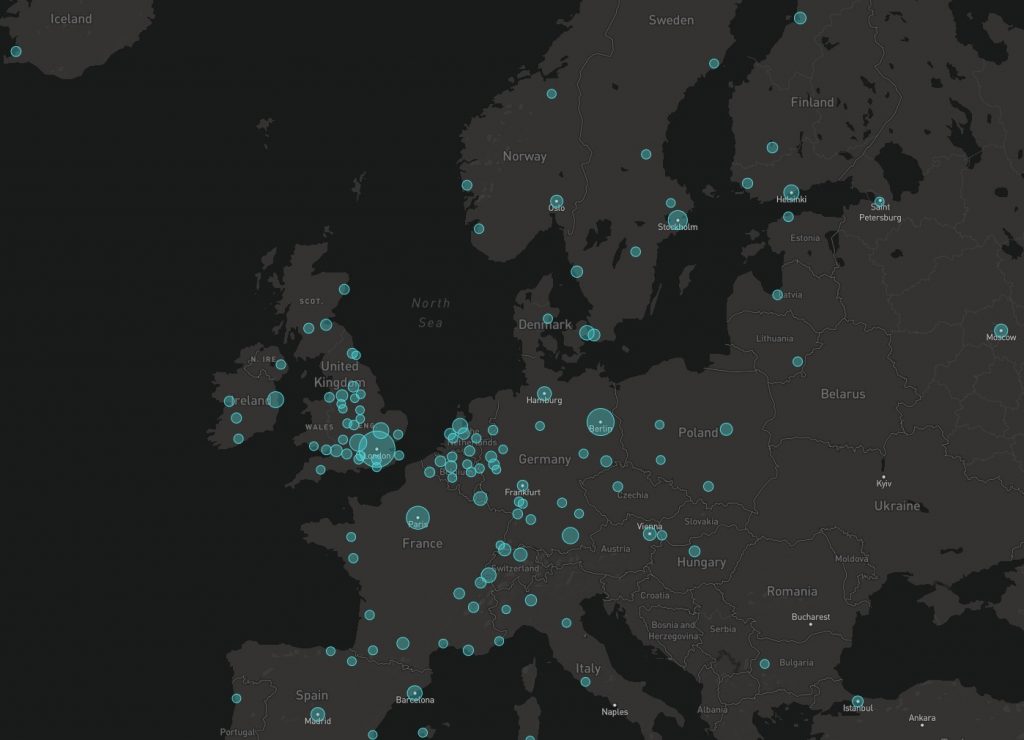 The one bright spot for Europe is in venture capital investment growth. We have three cities in the global #10 – however, the may not be cities you expected. They are Sofia (#4), Luxembourg (#9), and Palma de Mallorca (#10). As for the top 50, there are 14 European cities on the list. As with some of the rising Asian tigers, the high rankings can be explained at least partially by the low baseline which makes relative growth easier.

How About the Nordics?

Stockholm is the leading VC city in the Nordics having a fairly strong position in the global comparison:

Helsinki is behind Stockholm in both number of deals and euros invested, even if we look the data from per capita perspective. Especially in larger, later stage deals Helsinki area is substantially weaker than Stockholm or most comparable European tech hubs. But Helsinki is #2 in Nordic rankings as Copenhagen and Oslo do not move the needle much in this study.

One interesting note: there is life outside of Helsinki – Oulu is #15 on the list of the cities with the highest venture capital investment per capita and #18 in deals per capita. Oulu is, in fact, #3 in Europe, behind only two research hotbeds in the UK, Oxford, and Cambridge. Not bad for a city just below the arctic circle!

These data points are in good sync with our Transatlantic Bridge: