A brand new study called “Tech Startup M&As 2018” from our good friends at Mind the Bridge shows that the US is still the dominant force in tech startup M&A. As there is a lot of good stuff in the report, we will break down the findings into two blogs:

US buyers were responsible for 65.8% of these exits while European buyers make 30% of the exits. Buyers from the rest of the world only accounted for 4,2 % of all deals (disclaimer).

The US share of tech startup acquisitions is outsized –
even if we compare it to the GDP: a quarter of the global GDP but two-thirds of acquisitions

The US is head and shoulders above Europe in M&A, but there are major differences within Europe, as well.

Further analysis of the CrunchBase dataset shows that the vast majority (86%) of M&A happens inside the US and Europe or between the two continents. There is, however, a marked imbalance in these transactions:

Where are the Power Buyers from?

The message is clear: 18 of the top 20 tech startup acquirers worldwide are from the US, 12 of them from California. 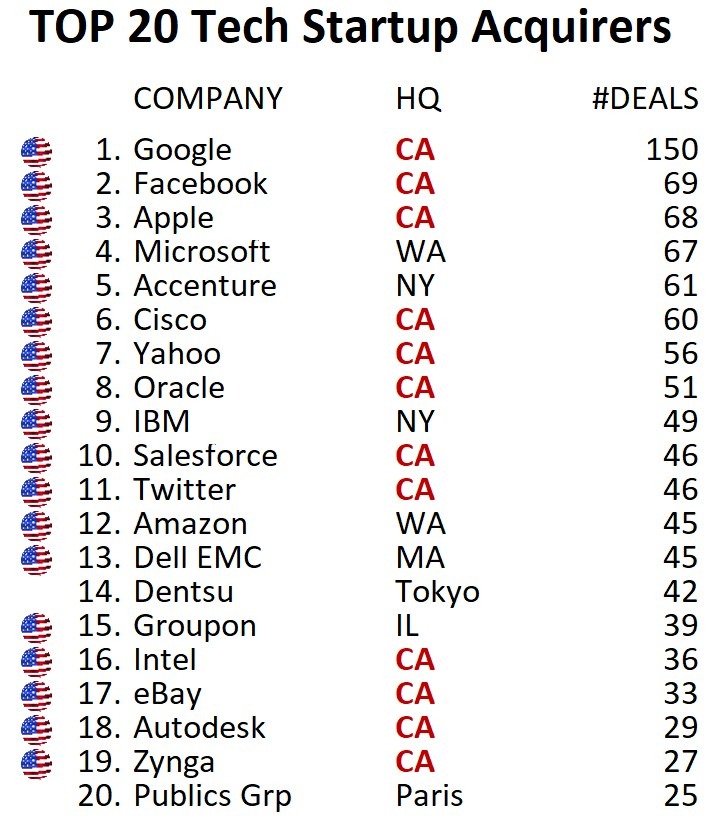 The only European company cracking the list was #20. While the European VC activity is developing nicely (see this earlier post), we are still definitely laggards in the tech M&A game.

Our key takeaways from the study combined with our own experiences are as follows:

One of the key chapters in our playbook since Day 1 has been creating a Transatlantic Bridge for Nordic startups. Being firmly established both in the Nordics and the US, we can effectively help our portfolio companies to succeed in the US market: attract the attention of customers, investors, and potential buyers.

We believe our track record proves this approach is working. More than half of our exits have been to US-based companies, including companies like Google, HP, Akamai, Sybase, and Nvidia.